The Esthetics of Mini-Dental Implants 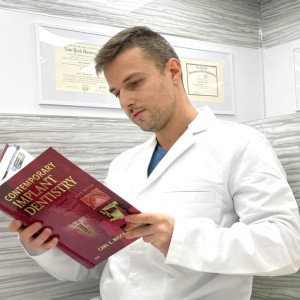 Patients who are interested in replacing missing teeth with dental implants, often ask; “what’s a better option mini-implants or traditional implants?”  Truth is they can both work wonderfully, but one is not necessarily better than the other.  At Smile Arts we believe in customizing patients’ treatment to their specific situation.

There are many advantages to mini dental implants.  There is no cutting of the gums and no need to place any sutures. Also, there’s almost no drilling involved.  Usually the dentist will use just one tiny drill, and the mini-dental implant does the rest of the work.  Since very little bone was lost from drilling, the implant is strong from the time it’s placed.  We can avoid waiting the usual 4-6 months as with traditional dental implants before placing a crown.  Patients walk out of the office with a temporary crown the same day.  The final crown can be ready just 2 weeks later.

In August of 2011, a young cardiologist stopped by our office.  One of his lower incisors was congenitally missing, it never grew in.  He has gone for numerous consultations, every dentist has previously told him there was not enough room to place a dental implant.  He was offered all sorts of options, such as a removable flipper, a bridge, he was even asked to extract another healthy tooth to make room for a conventional implant.  He did not like any of those treatment options. He just wanted his missing tooth replaced without damaging any of his other teeth.

Dr. Mann placed a mini-dental implant without any sutures, no cutting of the gums, and with no discomfort.  The entire appointment took less than 30 minutes and the patient left the office with a temporary tooth.

Two weeks after the implant was placed, the final crown was cemented.  Now, our patient can once again smile with confidence.  Mini-dental implant in this situation was the best way we could achieve such a beautiful result.

An x-ray taken three years later shows the healthy implant has integrated well with the bone around it. The implant looks stronger than ever and our patient is happy with the results.

More recently, just a few weeks ago a wonderful young lady who was missing one of her canine teeth came to our office.   Since the bone was thin, previous dentists have advised that she needs to have a bone graft, then wait for 6 months before an implant can be placed and then wait another 6 months before it can be restored with a crown.  The treatment would involve several surgical procedures, healing time, discomfort, and a total treatment time of at least a year.

Dr. Mann measured the bone and calculated that she would be a great candidate for a mini dental implant. The mini dental implant was placed and temporized with a crown.  There were no sutures, the gums were not cut, and patient states she had no discomfort during or after the procedure.

Two weeks later a final crown was placed. Our patient can once again smile with confidence.  The end result is a brand new implant with a crown in just 2 weeks.  Our patient had minimal discomfort, avoided bone grafting, saved time and money by utilizing the mini dental implant technology.

At Smile Arts we believe in individualized dental treatment.  Some situations require traditional implants, while in other circumstances a mini dental implants is the best option.

Our Manhattan Emergency dentists can help when an inconvenient dental

Tooth Enamel Erosion May be Caused by Common Beverages

Sugar is not the only dietary factor causing erosion of

It’s been said before that a “smile is your most

After working with some of the top world renowned dentists throughout New York City; in 2009 Dr. Mann decided it was time to achieve his vision by opening the Smile Arts of NY in the heart of Manhattan on E. 40th between Madison and Park ave.

Originally born in Ukraine, when communism collapsed his family took the opportunity to pursue the American dream and moved to New York. Dr. Peter Mann has lived in New York ever since, for over 22 years. His goal is to provide excellent dental experience for his fellow New Yorkers.

Dr. Mann lives minutes from the office. Patients undergoing treatment have his cell phone number and can always get in touch with any questions or concerns. It’s not unusual to see Dr. Mann arriving after hours to help a patient with an emergency.

Smile Arts of NY is located in midtown Manhattan.  We are considered one of the best dentists by patients who reviewed our services.

If you’re looking for a Manhattan “dentist near me.” Our cosmetic dental office is proud to serve patients from Midtown Manhattan NYC & Nearby Areas: